I was heartsick to hear of the passing of comedian Chili Challis last night. Chili was both a friend and hugely inspirational to me. When I was a teenager in Cincinnati in the late 70’s getting my comedy start at d.w. eye, Chili came in (along with John Riggi and Will Durst) with his extremely solid act, raising the bar for every comic that followed.  I was in awe of Chili (he was Bert Challis back then).  Sometimes he was so good I just got angry and jealous – but in retrospect, I realized that it was because of him, Riggi, and Durst that the eye got put on the map in the first place.  While the rest of us were figuring the game out, and wearing training pants, Challis was giving real legitimacy to the club. 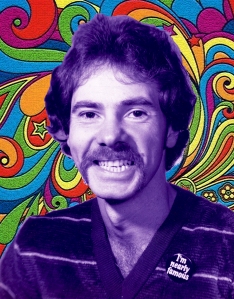 So, then about 10 years ago, when I started writing Plrknib – my book about d.w. eye – I found myself back in touch with Chili. He was hugely supportive of the book, and I discovered how much we had in common: we both loved comedy, comedy writing, nurturing and supporting new comics and talent.  (He spent a tremendous amount of time running well-respected comedy Dojos for stand-up newbies across the country.)  And a few years ago, he introduced me to ComedyWire – one of the nation’s fastest growing comedy writing hubs.

We also both had deep root feelings for Cincinnati and getting our comedy starts at d.w. eye.  And of course friends and family were important to both of us.

So, I was thrilled last year, when Chili didn’t just agree to join me, Michael Flannery, and the other comics for the d.w. eye reunion – but also to bring along his brilliant son and comic, Thaddeus Challis, to join us and carry on the tradition. That’s what Chili was about. 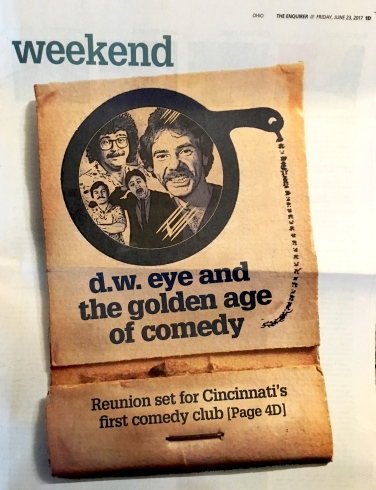 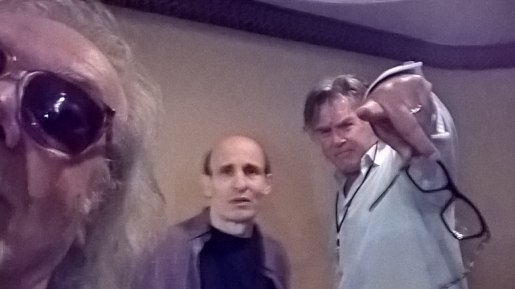 Unfortunately, we didn’t get a lot of pics at the reunion show, but here’s a phenomenal selfie Chili took of himself, Drew, and Marty Polio (who joined us at the last minute) back stage.  3 d.w. eye Legends.

And check out the video above for his performance last year at the eye reunion.